← more from
Nonostar Records
Get fresh music recommendations delivered to your inbox every Friday.
We've updated our Terms of Use. You can review the changes here. 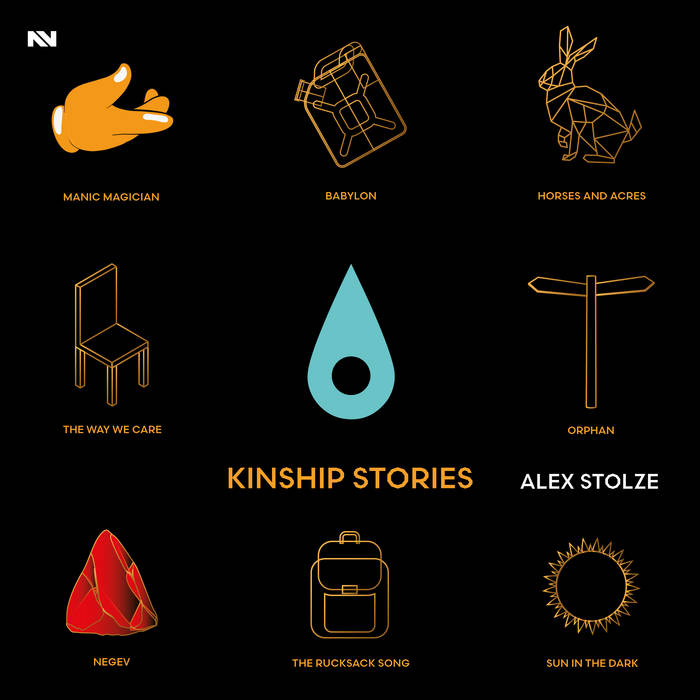 axel orth first one to encounter, still my favorite (at the moment) | especially love the ?violin? sound coming in at 0:44 and other times Favorite track: The Way We Care.

Following his highly acclaimed debut album Outermost Edge, the violinist, producer and songwriter Alex Stolze has re-energised his unique blend of electronica, alternative pop and modern classical in new offering Kinship Stories. The eleven tracks add a new layer of musical brightness and lyrical optimism to his sound. Infectious beats and catchy hooks contrast with the dusky hush of his debut, bringing his compositions - and their underlying political message - gloriously into the light.
"I worked myself through the darkness of Outermost Edge," explains Alex. "Now I want to share the happiness of the life I've chosen." He's referring to the lifestyle he's found at the unique location that he works from - a remote ruined building in the semi-abandoned borderlands of East Germany. Here, Alex and his family and friends have built their own homes and a thriving creative centre - a complex of three buildings in the middle of nowhere, housing Alex's Nonostar Records label and recording studio as well as the artistic workplaces of collectives CargoCult and World_registered association. Despite the isolated location, Alex explains, "I'm connected to the world. People come here from all over Europe, as well as the Middle East, Africa, the Americas - they're all part of the community we've built here."
This unique, shifting community became the creative inspiration for the record, reflected in its title Kinship Stories. For Alex, the ancient concept of kinship - a word that can incorporate family, friendship and shared connection - is the most accurate reflection of his world. "It's an extended family including not only my relatives but also the people that I feel very close to. It’s also a way of living, of building your own society."
Alex's lyrics tell the stories of those in his community - from Orphan's heartfelt description of a father and son rediscovering their connection after a family's "fall-apart", to Sun in the Dark's tale of a young woman dedicating her life to "care for the ones who can't be seen". In The Way We Care, meanwhile, he describes the kind of society he believes kinship can create - a commitment to spiritual truth, social justice and communal empathy. But his optimism is driven by a sense of urgency too - Babylon, written with lyricist and fellow Nonostar Records artist Ben Osborn, describes the darkness of a world that rejects these values - a landscape left "haunted and burned out... without a vision" and brilliantly scored by Anne Müller's brooding, cinematic cello.
Alongside his central political message, the works offer new vistas of musical experimentation. From out of his violin- and piano-led compositions emerge bright, danceable beats and catchy synth hooks, infusing the tracks with a diverse range of influences, from trip-hop to techno to dancehall and grime. "I picked up a lot of influence in South London, where I've been working with the playwrighter Harold Finley to create new musical theatre," says Alex. Elsewhere, he found new collaborators in unexpected places. Meeting a community of West African refugees and migrants in the small East German town of Schwedt provided a new source of inspiration and musical and creative connection, showcased in collaborative track Rucksack Song, a multi-lingual textural journey telling the story of an individual's difficult migration across Europe, featuring rapped and sung lyrics from Morlaye and King Ali.
But despite the myriad of contrasting influences and sounds an offer, Kinship Stories feels remarkably consistent and considered - a testament to Alex's deep commitment to his audience. "I always want to invite the listeners to come with me," says Alex. "I have a kinship with my listeners, too. They're a part of this community."

Performing with his unique, custom-made five-string electro-acoustic violin, Alex Stolze is a pioneering figure in his field of modern classical/post-pop musical explorations.

Bandcamp Daily  your guide to the world of Bandcamp

Mille Petrozza stops by to talk about the new Kreator album, plus music by Trauma Bond